Over the past many years, we've had the opportunity to tune for and consult with a number of the finest heads up racers in Canada and the United States. The racers shown here have multiple national event wins as well as regional and nitional event titles with series such as the NMCA and OSCA. We've also enjoyed taking our own in house vehicles to events here in the central United States. 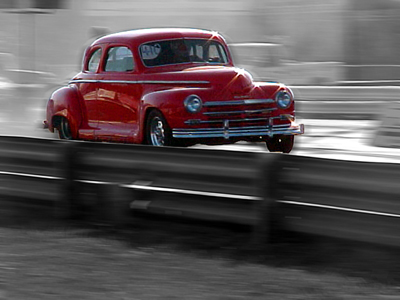 Shown above in 2001, this is the car that started it all. A 1948 Plymouth Special DeLuxe club coupe which has seen a number of naturally aspirated, nitrous injected, supercharged and turbocharged small and big block chevy engine combinations. We recently revived it with an SFI 25.3 chassis and a Mustang II front suspension. Though we first fitted the 509ci BB Chevy with a pair of 88mm turbos, we've since fitted it with an F-2 ProCharger, FAST XFI 2.0, M&M Transmissions 2 speed TH400 and one of our XDRIVE centrifugal supercharger drives. Below is a picture of the car in its current state. Photo from 2014 Ozark Raceway Park Street Machine Nationals, courtesy of Kim's Drag Racing Photography. 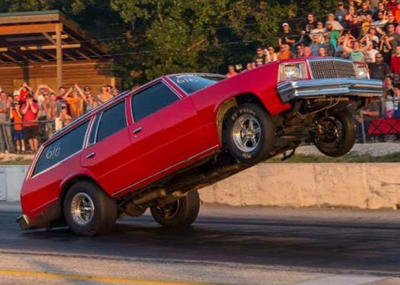 If you've attended any no-prep races in recent years, you have no doubt seen this wild ride. Andy Reynolds out of Texas runs one of our X-10 gear drives on his SB Chevy equipped Wagon running a ProCharger F-1X-12. 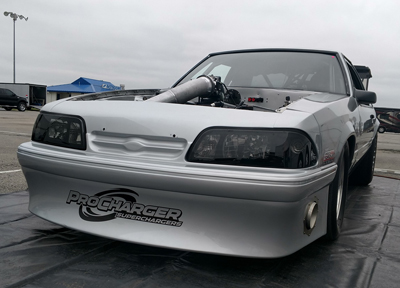 This clean Fox Body belongs to Tyler Crossnoe. Tyler is running one of our X-6 gear drives on this F-1A-94 equipped Bennett Racing 400U, racing in ultra street. 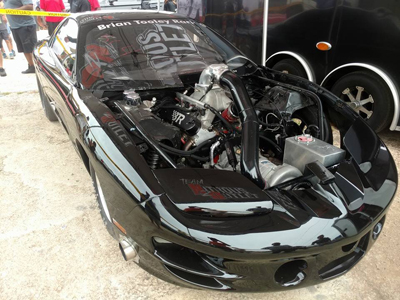 You may recognize this ride from Street Outlaws New Orleans. Travis SantaCruz runs one our X-series drives on his F-1X-12 equipped LSX application. 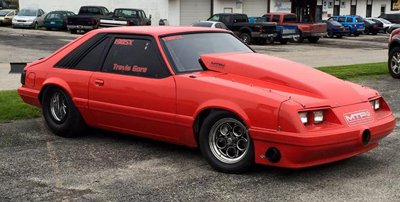 This bright red Fox Body belongs to Travis Gore, one of our long-time tuning customers. Travis has this Four-eyed SB Ford ride running 4.50's in the 1/8th mile and is showing low 4-second potential. 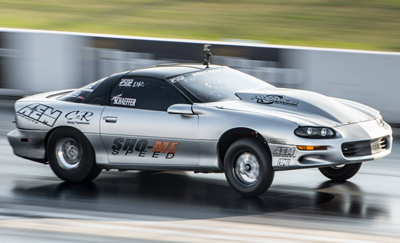 Another LSX application, this Camaro "Silver Juice" belongs to John Schaeffer. John is running one of our X-10 drives with his F-1X with et's dipping into the 4-second zone in the 1/8th mile.

A car that is well known to small-tire racers throughout the central U.S., Kit Luong is one of many MTP customers we've had the pleasure of doing tuning work with in recent years.

This all-steel Camaro belongs to Jake Delmonico. This ride runs over 200mph in the 1/4 mile on DOT tires, weighing over 3000lbs. Jake is running one of X-10 drives with an F-1X-12 on his BB Chevy. 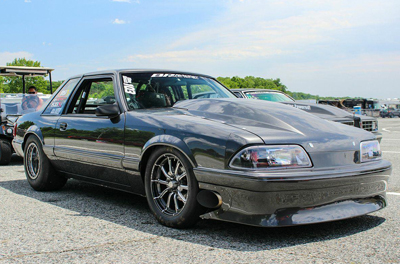 This clean Fox Body belongs to Rodney Ragen. Like Tyler Crossnoe, Rodney is also running one of our X-6 gear drives on this F-1A-94 equipped Bennett Racing 400U, racing in ultra street. 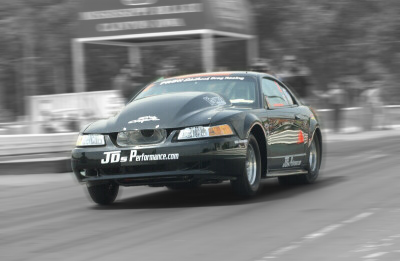 The ride pictured here was piloted to the 2003 NMCA Super Street championship by Joel Greathouse. This car set multiple et and mph records during the season with MTP's Chris Spies tweaking the FAST efi system on this supercharged 380 ci Small Block Ford powerplant. Weighing in at over 3000lbs, this Mustang cobra managed 7.30 second et's at 190+ mph on 10.5" tires. 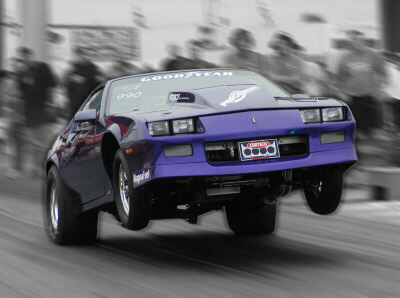 Showing what one can do with the most basic combination of components, Donny Hastings 3300lb Camaro managed to click off 8.10's at nearly 170mph with a supercharged 406 ci small block Chevy running many off-the-shelf components including conventional 23 degree cylinder heads. This combination very closely resembles the boost ready long blocks currently available from MTP. This car was also equipped with an ACCEL DFI Gen VII efi system, tuned by MTP's own Chris Spies. 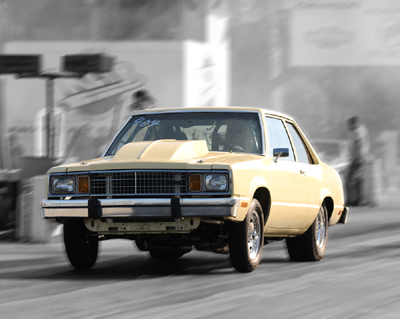 Putting our money where our mouth is, we put together this '79 Ford Fairmont. Equipped with a SFI spec 25.5 chassis and a E85 gulping, turbocharged 380 ci small block Chevy this street driven ride mustered mid 8 second et's on 28 x 10.5" slicks back in 2007. It was last equipped with a VP Q16 fed 406 ci small block and a ProCharger F-2 supercharger. 275/60R15 Mickey Thompson drag radials were fitted to allow the vehicle to compete in the VAMP heads up racing series' drag radial class. Our first attempt in 2008 netted a trip to the finals despite nagging transmission issues. We parted with the car in 2011 and turned our efforts back toward the our ever-popular '48 Plymouth. 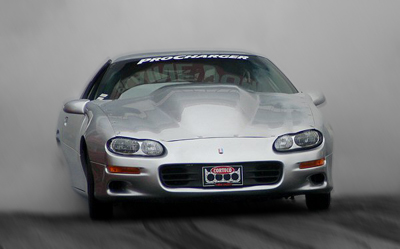 For years, the "big dog" of the MTP stable wasRay Sanchez's twin 88mm turboharged 500ci big block Chevy Camaro. Built and occasionally piloted by ADRL Pro Nitrous Champion Dan Parker, the this ride has mustered six-second et's at over 215mph with Ray behind the wheel. For 2009 we're adding a state of the art FAST XFI system with ITC (intelligent traction control). With this and other advanced functionalities, the team expects to again find themselves at the front of the ultra-competitive Canadian Outlaw 10.5 pack.

The above represent some of our most prominent and radical applications. We want you to know you're in good company if you choose to partner with us on your street or strip application. MTP offers everything from simple tuning/consultation services to complete EFI-equipped engine packages. As one can see, we're not afraid to "put our money where our mouth is" and make use of the very same components we recommend to our customers. We work hard to ensure we equip our customers with a combination that meets their needs. Please feel free to contact us about your application today. We may be reached via e-mail at sales@mtpturbo.com.